Intro by Peter Kelly, Webmaster: In mid-2011 Ramy and Buzz performed the spectacular feat of flying their gliders from Byron, California, in the Central Valley across The Bay, past Stinson Beach and back to Byron, remaining below the floor (4,000 ft)  of the airspace reserved for the commercial jets.  One of photos (all taken with a wide angle GoPro HD Hero camera) was the cover page for the international magazine Soaring.  We are privileged to report Ramy’s repeat of the “Bay Tour” as he refers to it, but this time from well above all of the commercial traffic.  On this spectacular flight he is operating between 16,000 and 18,000 ft. 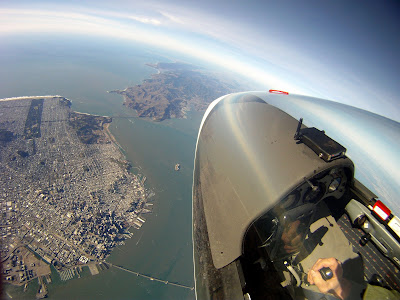 Less than a year after my first Bay Tour, which was almost entirely  between 2-4000 feet and below the  the floor of class bravo, I repeated the trip, this time way above the 10,000 feet ceiling of class bravo, between 15-18,000 feet. What a spectacular view!

Took off on Saturday January 7 shortly after 11AM and released couple of miles west of Los Vaqueros towers over the red roofs in 1-2 knot wave, which got stronger further up, then moved to the Diablo wave and topped just below 18,000 feet nearly 2 hours after I launched. The wind was mostly from the north 40-50knots. Before the flight  I decided that if I can get to near 18K I’ll try to repeat my Bay Tour flight, this time way above class bravo instead of below. I calculated that as long as if I can stay above 15,000 feet I can continue safely above class bravo, otherwise I should be able to escape to the side without risking dropping into the airspace below. So once I got to just under 18K near Mt Diablo, I headed west, working multiple wavelets making sure I stay well above the ceiling.  I found the next wave over the Oakland Hills, then crossed over the Bay Bridge to Downtown San Francisco and the Golden Gate Bridge where I found the next wave downwind of the Marin Headlands, which got stronger as I got closer to Mt Tamalpais and Stinson Beach. The best wave was over the Pacific, and I continued over the water to Point Reyes where the wave petered out,  then turned around and flew back to the Mt Tamalpais wave. Once back to near 18K I went downwind south along the San Francisco coast to Half Moon Bay and La Honda where I encountered strong wave again downwind of the Santa Cruz mountains. It was now after 4PM, with less than an hour left to fly over 40 miles cross wind back to Byron, so I turned east over Mountain view across the bay to Mission peak where I found strong wave again, but no much time left to enjoy it, so pushed the nose down to near VNE, did one last detour to the Diablo Range (Release 1 waypoint) to burn altitude, and back to land at Byron 3 minutes before sunset. Total distance was 322km, almost entirely within glide of Byron! I got below glide back to Byron only once near Point Reyes…

Editor’s note: After passing the Golden Gate Bridge Ramy traveled south past Half Moon, then turned eastward and crossed south of The Bay.

Archive of all Posts